A Ride with Trade

This ride started and ended as all adventures should: with a bar full of bikes.

Early Saturday morning, the Adventure team rolled up to Trade, a downtown Boston restaurant most of us are used to entering in slightly less skin-tight attire and way more suitable shoes.

We were all excited. We'd been invited to help lead one of the Trade/Rialto team's training rides for the Pan Mass Challenge -- a two-day, nearly 200-mile trek across the state to raise money for cancer care and research. [View their profile and maybe help them hit their $100k goal.] In exchange, we would get a cooking class from a woman who has the paradoxical challenge of the food-obsessed long distance cyclist: an exacting palate and the need to consume lots of calories, fresh from a jersey pocket. 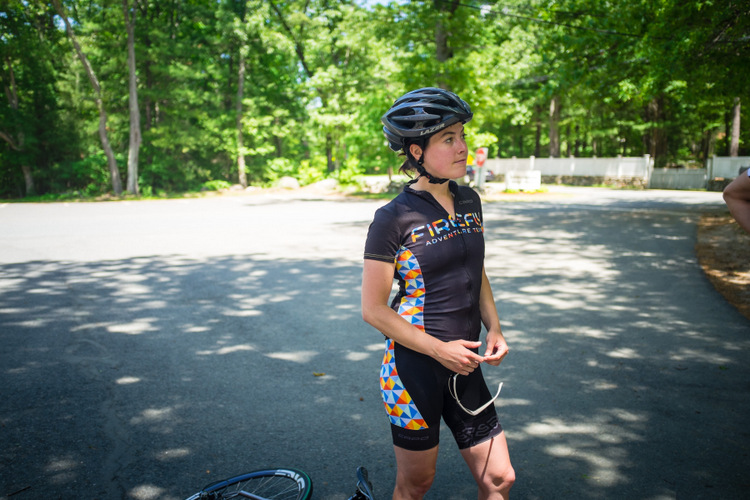 One thing you notice when you are a woman who rides bikes is other women who ride bikes. For years, Jody Adams has been an inspiration to many of us: a successful woman restaurateur who co-owns Trade in Boston and owns Rialto in Cambridge, leader of a team that's raised an astonishing amount of money each year for charity, and an avid cyclist and advocate for more women on the road.

She started the lesson with a paceline at Trade's bar counter. We lined up to assemble Vietnamese-inspired bike spring rolls packed with peanut sauce, vegetables, marinated tofu, herbs, and as much Sriracha sauce as we could stand. Jody made sure we kept it tight and offered gentle feedback on our technique. We rotated off the front and went to the back to try again.

With several spring rolls stuffed in our back pockets – and some in our bellies – we were ready to ride. We split into two groups and embarked on a 60-mile ride that highlights just how lucky we are in Boston, to be able to ride out of the center of our city into beautiful countryside.

This was the first time I can remember that a team ride wasn't tempered with a little bit of suffering or enduring somewhat miserable weather conditions. The entire day was a needed reminder of just how purely happy you can be on your bike. We ate fresh strawberries at a farm in Natick, were led to a secret spigot to refill our water bottles, and enjoyed great conversation. We ate the best bike food to ever emerge from my back pocket, and in case you were wondering: no one bonked.

We returned to Trade in late afternoon and drank beers at the bar, feeling summer had finally arrived. Jody volunteered to head back to the kitchen and whip up some flatbreads. I was going to be late, but I could stay for awhile longer.